Due to the holiday period our turnaround times may be slightly longer than usual. Thank you for your understanding and we wish you a happy New Year!!

A message from the XpertScientific team

As we have been receiving enquiries as to our operational capabilities during the current crisis we have set up this page to provide some information about whether and how XpertScientific and our services are affected. 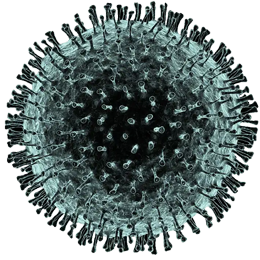 We do not currently expect any disruption to our service and should be able to continue operating at normal capacity despite the restrictions on movement.

While we don't expect any issue in the foreseeable future, we will of course notify you before accepting payment for a specific order if there are any changes to our usual service or turnaround times.

We wish you the necessary strength and good health to master this crisis.

As a science consultancy, we wanted to keep an eye on the development of this crisis and decided to share some graphs of the total case numbers including past and current trends, testing capacities, and fatalities for a few countries.

The data have been divided into cases up until the date when strong mitigation and self-isolation measures came into effect (~15 March in several European countries) and cases from that date onward. Data from before the cut-off date were used to create an exponential fit that was extrapolated a couple of weeks into the future to illustrate where numbers might have gone without mitigation measures. This extrapolation is missing from most public sources, but we believe that it is useful to gauge the development of case numbers and illustrate the seriousness of the situation.

Each plot also contains a trendline based on just the 5 most recent data points. This more recent trend and its deviation from the early March trend may serve as an indication of the effectiveness of mitigation measures. However, any such deviation may also be due - in part - to the fact that countries were still ramping up their testing capabilities in early March which would result in a disproportionate increase in case numbers. Please note that potential errors and the dark figure due to insufficient testing or lack of self-reporting in cases where the disease takes a mild or asymptomatic course may be considerable, which is also indicated by the high case fatality rates in some countries (see below).

Graphs are updated once daily.

All plots are © XpertScientific. Please get in touch with us if you wish to use a particular figure in your publication.

Italy reports its daily new cases separately, although incorrectly we believe. Firstly, we should explain that Italy's cumulative case numbers (totale casi - what is shown in the figure) consist of the total number of currently positive (totale attualmente positivi) plus those discharged as healed (dimessi guariti) plus those deceased (deceduti) (official numbers). They report a day's number of new positives (nuovi attualmente positivi) as that day's total number of positives minus the previous day's total number of positives which seems incorrect as the following example will illustrate: let us assume that on day x there were 10,000 total positives; let us further assume that on day x+1 there were 12,000 total positives, 500 positives recovered and were discharged as healed while 1,000 positives deceased. What Italy reports as new positives is 12,000 - 10,000 = 2,000. However, as 500 of the previous day's positives are now in the discharged as healed group and 1,000 in the deceased group, the actual number of new positives is 12,000 - (10,000-500-1,000) = 3,500.
There are also some inconsistencies in Italy's official numbers on fatalities and the country is currently reviewing them.

According to a news report, these numbers may be grossly underreported as over 40,000 new cases appear to have been treated by local GPs in the week from 16-22 March alone, while the official figure for 22 March was reported as 16,000. France is currently reviewing their official numbers as a result.

Fig.6 - Cases in the US. Here, mitigating measures were taken later and data points are divided accordingly. Source.

Most of the success in S Korea has been attributed to high volume testing and rigorous quarantining of the infected and their immediate contacts. Unlike European countries, S Korea did not impose any significant restictions on the mobility of the general population.

Sweden is an interesting case as it is the European country with the least severe mitigation measures. Apart from the usual recommendations about hand washing and social distancing - which is really physical distancincing - both social and work lives in Sweden continue almost unaffected except that gatherings of more than 50 people are forbidden leading to the closure of high schools and universities. However, museums, primary schools, pubs, restaurants, malls and shops, as well as gyms and ski slopes all remain open. The government has justified this approach with the self-restraint and sense of responsibility of the Swedish people, stating that "our whole system for communicable disease control is based on voluntary action". While it is too soon to tell whether this approach is appropriate, it certainly provides and interesting reference point.

Fig.8 - Cases in Sweden. As Sweden did not really take any mitigating measures, the separation of data points has been made based on obvious differences in trends. Source.

Evolution of case numbers during the first 30 days

Fig.9 - Comparing the evolution of case numbers once a country passed 100 confirmed cases (note: S Korea reached the 30-day mark on 21 March, Italy on 23 March, Germany and France on 30 March, Spain on 31 March, the US on 1 April). Hint: click on the lines/legend items to remove/add certain countries. Source.

Note that case fatality rate (CFR) can be calculated as CFR = [number of deaths]/[number of known cases] × 100 (in %). What is much more difficult to estimate is mortality, i.e., the probability that any individual in the population will die from the disease or the infection fatality rate (IFR), i.e., the likelihood that a person who is infected with SARS-CoV-2 dies because of COVID-19. The relatively high CFRs in some countries suggest that the disease went undetected there for some time and the dark figure may still be considerable as the actual IFR is expected to be below 1%. In addition, fatalities from Italy may be grossly (by factors ranging from 4 to 10 depending on the community) underreported based on a news report. In response, Italy is currently reviewing official figures. According to a recent study, the high CFR in Italy may also be due to a change in testing strategy that came into effect on 25 February by which only people exhibiting severe symptoms were being tested for SARS-CoV-2 but not their immediate contacts or people with mild symptoms. If we assume that the actual number of fatalities is 6-7 times higher than officially reported and if we further assume an IFR of 0.5%, we would expect case numbers to be in the lower 8 digits already, possibly having reached levels of herd immunity in some particularly affected communities in northern Italy.

Number of tests for SARS-CoV-2

While Spain reports the number of specimens tested other countries seem to report the number of people tested while Germany does not report any official numbers at all. Italy reports "tamponi" (literally "swabs") which we interpreted as people rather than specimens especially given the high percentage of positives (see next figure). Testing a person requires the analysis of at least 2 specimens while for some persons a repeat test may be necessary to confirm a result. To be able to compare published figures we therefore divided the numbers from ES (corresponding to specimens tested) by 2.1 to estimate the number of people tested which is what is shown above. Germany does not report an official number, the number shown below has therefore been taken from a news report. Other sources: KR, IT, UK, ES, FR, US, source for population data.

Fig.11 - Number of people tested for SARS-CoV-2 per 1 million inhabitants by country.

Fig.12 - Comparing (a) the total number of daily tests per 10,000 people and (b) the percentage of tests that are positive (symbols) with a smoothing spline (lines). The time series correspond to countries that provide daily test numbers while the remaining countries are shown as a single point in (b). The offset between the test date and the date its result is reported may explain some of the rather wide scatter in (b) which is why we fitted a smoothing spline to the data. The high percentage of positives in some countries suggests that the dark figure was and may still be considerable. As explained in the caption to Fig.3, for Italy we used the difference in cases to estimate new positives rather than the officially reported figure which be believe to be incorrect. Sources: IT, US, KR, UK, FR, ES, DE.

Results from an epidemiological model 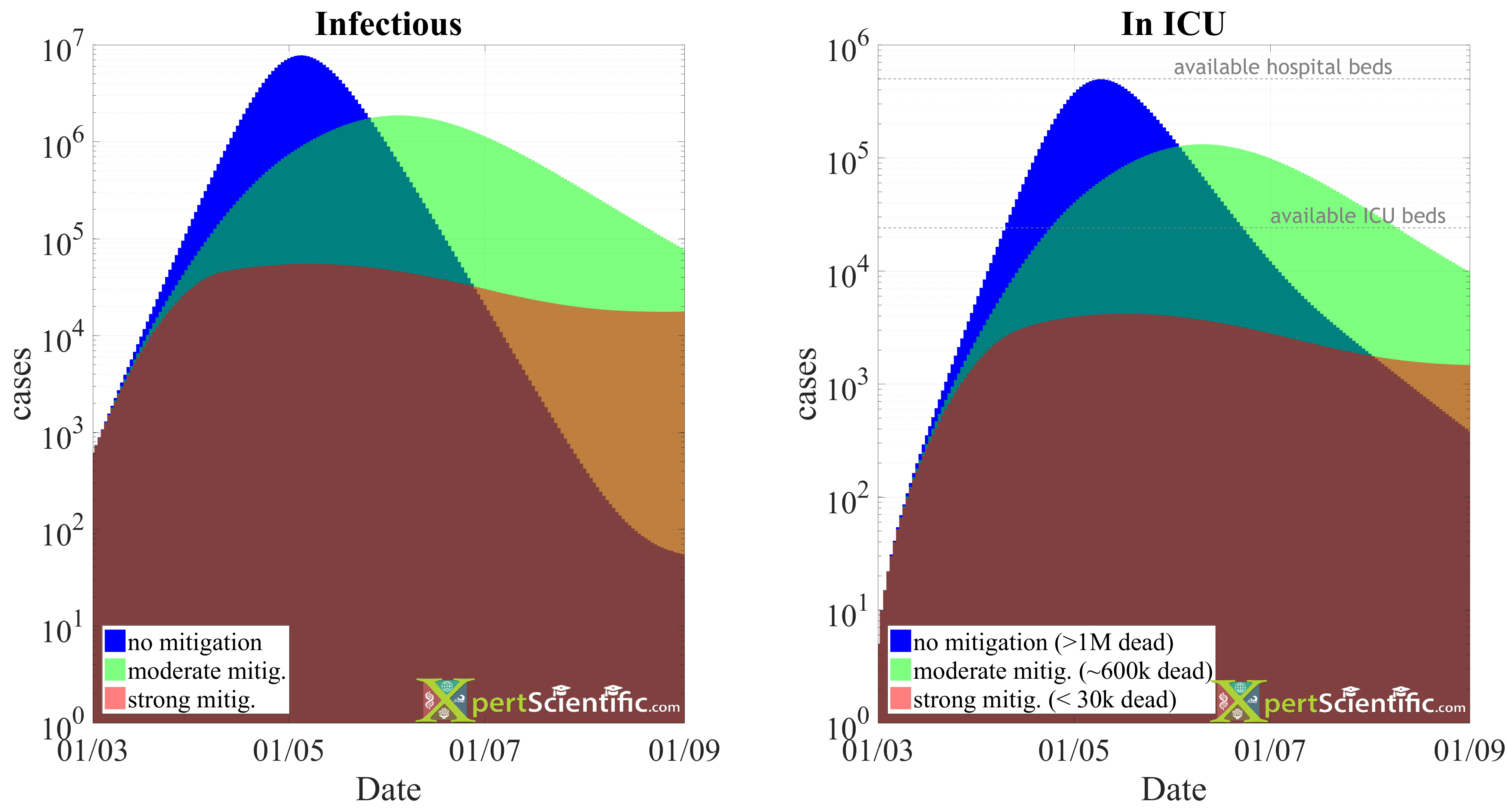 Fig.14 - Results from the epidemiological model by Neher et al. (Univ. Basel) comparing the effect of different levels of mitigation measures using the standard (pre-set) parameters for their Germany scenario. Source. In the absence of any mitigation, the pandemic would be over by September but there would be more than 1 million deaths in Germany alone. Only with the strong mitigation does the number of hospitalizations remain below the ICU bed capacity and deaths would therefore remain in the lower 5-digits, however, the pandemic (and isolation measures) would last well into 2021 unless a viable therapy is found that can significantly reduce fatalities.

Effect of the Covid-19 crisis on emissions

One interesting aspect of the coronavirus crisis is the reduction of CO2 emissions and pollution as a result of the economic slow-down and travel restrictions. The figure below shows how pollution (nitrous oxide) levels have cleared in the lower atmosphere over China due to a decline in traffic and industrial production. 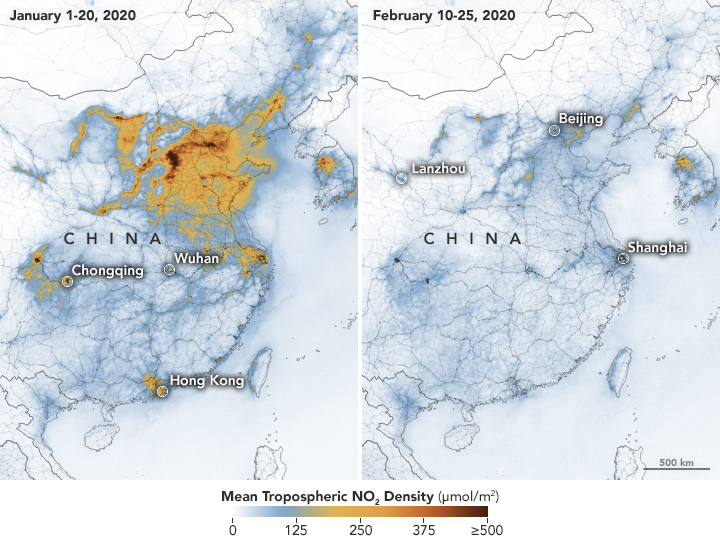 Fig.15 - Reduction of nitrous oxide in the lower atmosphere as a result of the Corona crisis. Source.

Updates/Jobs
Want to be informed about updates or job postings? Follow us on